London in the first months of the war 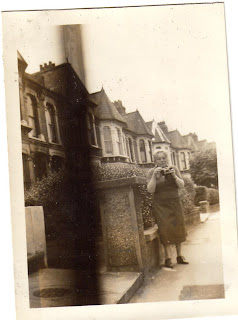 I’m now dealing with what was called “the phony” war. Everyone was carrying their gas masks around but nothing much was happening. Some of the children who had been evacuated were drifting back to the big towns. Renate could not, though. The family she had been living with in London had moved to Gloucester. Most of the students of the Michael Hall School stayed in Minehad. She and her mother did have another problem by then. They were classed as “enemy aliens class B”. Although they were quite harmless, there were still several formalities to go through. They mustn’t stay too near a munitions factory, the seaside – difficult, the school was at Minehead - or go more than ten miles away from home without special permission. Kathe was not interned – she still worked for the Smiths. Renate didn’t have to worry until she was sixteen. But the new law served as a reminder that she didn’t really belong anywhere. The picture shows the house in London where Kathe Edler lived. The woman in the picture is her flat mate Eva Kaiser. Apparenlty, they were the best of freinds but argued a lot.
Posted by Gill James at 06:26