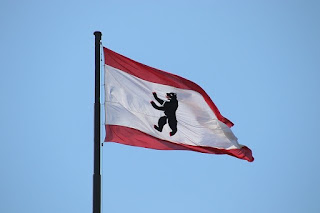 I attend a U3A Spanish group and our group leader sends us something to read and discuss each time. We then have to prepare a short talk about something to do with the article we have read. One of our recent topics was the Berlin bear.  It was a little curious discussing something so German in Spanish. We had to prepare something about bears for our talk.

Well, it was rather obvious to me. I would talk about Bear, the brother of the protagonist in Girl in a Smart Uniform.

·         His real name is Edelbert but Gisela couldn’t pronounce it when she was a little girl. So, he became Bear.

·         He joined the army more because it was expected rather than because he wanted to.

Well, I piqued the curiosity of our group leader and she bought the book.  There you go.

Email ThisBlogThis!Share to TwitterShare to FacebookShare to Pinterest
Labels: Girl in a Smart Uniform, marketing