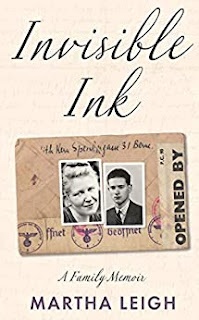 This is an account of a family separated by the World War II and the Holocaust.  It is also the story of a couple who came together despite numerus difficulties.  Martha Leigh tells her parents’ story.  Her mother Edith was an accomplished pianist and her father Ralph was a professor at Cambridge University.

Edith came from the Ukraine but from a town that felt more Austrian than Ukrainian. She spent time in France and Switzerland. She was actually interned in Switzerland but still managed to give concerts.

Her brother and sister-in-law were doctors and were stopped form practising by the Nazis.   However, her brother went on to become a doctor again and specialised in anaesthesia.

Edith and Ralph’s had a long-distance relationship during the war years and Ralph could never love her the way she loved him – he was a homosexual.

This offers us some interesting insight into life in the 1930s and 1940s, and particularly what it was like for Jewish people and for homosexuals.

It’s not an easy read: there are a lot of names to remember, the subject matter is a little harrowing and the tone a little dry. However, it is rich in information and so it is worth persevering.