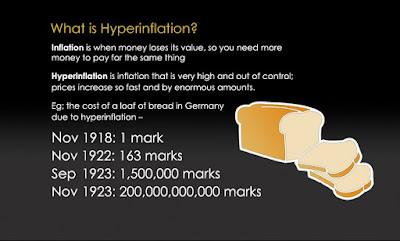 A tale of two rucksacks

There were two left when he got there.
“I’d like the two rucksacks in the window,” he told the assistant.
“That will be 20,000,000 marks,” said the young man.
What? They’d gone up that much in what – how long had he been – an hour?
“Very well,” said Ernst. “And what could you sell me for 100,000 marks?”
“Nothing really. You could try the stationers next door. Maybe a note book?”
That might be an idea. He could record their journey in it or try and work out his thoughts on this new life he wanted to take on. He handed the money over to the assistant.
“I’ll just go next door while you wrap those up,” he said. If he waited a moment longer the 100,000 mark wouldn’t even buy a piece of paper.
(Extract from Clara's Story.)

But as it went on, things got worse. Dentists and doctors stopped asking for currency, seeking payment in butter or eggs instead. Prices rose not just by the day, but by the hour — or even the minute. If you had your morning coffee in a café, and you preferred drinking two cups rather than one, it was cheaper to order both cups at the same time. See: https://inflationdata.com/articles/hyperinflation/

People collected their wages in suitcases.

One person, who left their suitcase unattended, found that a thief had stolen the suitcase but not the money.

One boy, who was sent to buy two bread buns, stopped to play football and by the time he got to the shop, the price had gone up, so he could only afford to buy one.

One father set out for Berlin to buy a pair of shoes. When he got there, he could only afford a cup of coffee and the bus fare home. See:
http://www.bbc.co.uk/schools/gcsebitesize/history/mwh/germany/crisis1923rev_print.shtml

In 1920s’ Germany hyperinflation devalues the currency so much that a wheelbarrow filled with cash wasn’t enough to purchase a newspaper.

Email ThisBlogThis!Share to TwitterShare to FacebookShare to Pinterest
Labels: hyperinflation