The Stammtisch and Newspapers 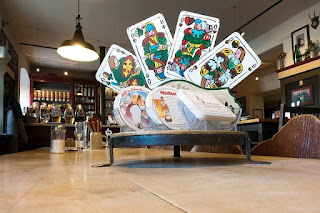 Most German inns have a “Stammtisch”.  This is a table reserved for locals. For the people who “stem” from the place. And that is where the locals gather to set the world right. They will discuss a mixture of factual news, urban myths, fake news and conspiracy theories and perhaps play cards. Amateur politicians and well-meaning philosophers alike will gather and chat.

In the time that my novels are set it would be very rare for a woman to attend a Stammtisch.

I have two characters in the novel I am writing at the moment who attend the Stammtisch for morning coffee, a beer or two and to read the newspapers and chat about them.  It was quite common before everyone had smart phones for cafés and bars to stock newspapers as well. Both characters are older brothers. One is home on leave, the other has been invalided out of the war.

The girls and women are shut out and don’t even read the newspapers. This came up a few times in the original letters by the girls.  They relied on fathers, brothers and fiancés to interpret the news for them.

We could argue that much of the “news” was in fact propaganda. Would they then turn to fiction? Again there is a problem here. Much of the fiction supplied to the girls was also propaganda and other literature was destroyed.

We have it a lot better today, don’t we?  Or do we? We have fake news, urban myths and conspiracy theories all over our social media. Computers work out what we are likely to be interested in and target advertising and other types of articles.

Could the Holocaust have happened if there had been social media? Or would that have been censored and might we face that danger today?

Are the Stammtisches, the benches under the orange trees, the sociable cafés and benches that are springing up now safer communicative spaces than our social media platforms?