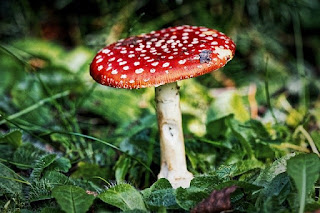 So, the girls in Book 5 are bystanders. I’ve just been going through some of the chapters after which their teacher has told them about some of the things that happened:

·         One of their teachers was imprisoned because she had failed to denounce Jewish children in her school.

·         A priest was arrested because he had hidden two Jewish children in his cellar. He was due to be executed but actually died of a heart attack the night before his execution.

·         Another Jewish school friend fled to Holland.  No more has been heard of her. We assume the worst.

In my latest edit I’m looking particularly at dialogue. What did these girls say? How did they say it? As they spoke German I can take a few liberties and include more modern English than I would if I were writing about British girls.  I have to try to replicate what the Germans would have seemed like to them.

Some interesting vocabulary emerges.  Der Giftpilz - the poisonous mushroom -  is mentioned quite a bit.  This was an illustrated story used as propaganda for the BDM. The Jew was seen as a poisonous mushroom that they must be rid of.

Will the guilt ever go away?