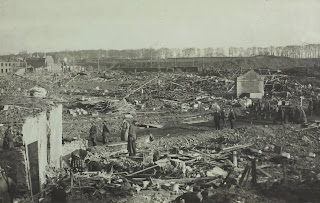 Life was hard for the young German women in this book. Of course it was also for young women living in Britain and it must have been especially so for the French and the Dutch.

Some things were the same. Some were different.

The Depression hit Germany particularly hard and before that the hyperinflation. These girls were born shortly after the hyperinflation but their parents would have been ruled by it. The Germans felt supressed. There was a great desire to make Germany great again. The BDM and its smart uniform would give the girls some hope of that.

Some schools were evacuated in Germany and some schools, like the ones that our girls went to, were closed because they would not offer a propaganda-rich curriculum.

Young people who were evacuated in Germany did not live with other families; they were kept together so they slept in dormitories and ate in canteens. The indoctrination could carry on beyond the classroom.

The RAD found many young women working on farms and some did work the land and gather in the harvest.  Very often, though, the girls took on the housewife’s work so that the farmer’s wife could then work on the land. Was this more practical or not?

War work was very similar.  My research found girls working on military air traffic control, the post office, hospitals and continuing the sort of work they had done for the RAD. In this novel I have one girl working on the family farm, one acting and two running their father’s firm after he died. The factory for the latter is run mainly by women and a couple of men who are too old to fight. And in any case they are working in a reserved occupation: they are making spectacle frames and cases. This latter I based on my own mother’s war work.  Twins I came  across in my research took over the running of a factory after their father died. And one girl become an actor, putting on satirical plays in an underground theatre.

There was rationing but were the food shortages so bad? Germany is on a huge landmass so supply may not have been so much of an issue – especially as she was occupying several nearby countries. The farming girl hardly has a problem. The actor’s mother forages and pickles.

Two of the girls have brothers who are injured and two of them have a war-damaged fiancé. The twins welcome first two neighbours to their home and then later their aunt and uncle and cousin’s fiancé after the home of their aunt and uncle is destroyed. Tragically, both of their cousins also die.

The class teacher has to give up teaching because she refuses to deliver the new curriculum. She ends up doing war work, looking after supplies at a local hospital. She also turns her home in a guest house and offers accommodation to young women who have to work away from home and to families who have lost their homes.

Possibly worse for people on the continent was displacement. On our relatively small island we cannot wander so far from home. The girls in this book do not lose contact with relatives but they do have to wonder what happened to one of their school friends.

Photo by Museums Victoria on Unsplash
Posted by Gill James at 04:05