Another letter taken out by request. Gerda generally gives us some insight into what it was like on German farms.

Dear all,
So good to hear from you. We’re all so busy and we’re all growing up, aren’t we?
My time at the agricultural college will soon be at an end. I really have learnt so much. I’ll miss going there, and the friends I’ve made. But I won’t miss all the homework and now that I’m not going to and fro all the time, I’ll have even more time for the farm.
Just as well, really. Hans has been called up and has now been in the army since last September. He didn’t want to go.
“Those people who can’t wait to volunteer have no idea what it’s like,” he said. “It makes working on the farm look easy.”
He was worried that he would go straight into active service as he’s already done his basic training when he did his military service. Well, true enough, he didn’t have to do the basic training again, but he hasn’t been involved in any fighting yet. We don’t know when he will get some leave.
He and Thomas had the most dreadful row just before he went. Thomas said he ought to be proud to fight for his country. Hans said Thomas hadn’t got a clue what he was talking about. They ended up having a scrap and father and I had to pull them apart. They still weren’t speaking when Hans left the next day. Mutti keeps crying. At least Thomas seemed to be sorry for what he said and he has sent Hans a post card to say so. We don’t think he’s got it, though, because he hasn’t mentioned it, actually.
I’m a little worried about Thomas generally. He seems to relish all the nastier things they do in HJ. The other day he even asked father if he could use one of the pigs that were going to be slaughtered for bayonet practice! Father said no, of course. And Thomas greets all of the animals with a Heil Hitler!
Still, at least he works hard on the farm now. He does have a lot of energy. This is good, as father has to spend a lot of time with the Heimwehr.
The vegetables are doing well now – we too grow spinach, and cabbage, carrots onions and leeks. There’s plenty for us and plenty left over to sell, though lately we’ve been giving a lot away. If you’re short of food and could get to the farm, you’d be very welcome to our surplus. I’m able to put much into practice of what I’ve learnt at college, so the farm is becoming quite successful. All very scientific!
Well, I must go now. Time to do the milking!

All my love, Gerda


Another of Helga's letters is struck out. Again, I've still left it out of the second edition. It does, however, still give a little insight about what it was like for the young women living in Germany.

Dear all,
So good to get our little book again. So relaxing to sit and read it. I’ve been working really hard this summer. I’ve had total charge of the cousins for the summer holidays. They’ve stayed with us. Their fathers are away and their mothers are busy with war work. But tomorrow they go home. My aunt has come to take them back. All six of them will have to pile into my uncle’s car. I really admire my aunt for being able to drive. That’s her job now. She has to drive one of the SS commanders to important meetings. She has a few days holiday and then they all go back to school. She’ll drop the other four off with my other two aunts. I’m not sure what they do – nothing as exciting as Aunt Gabi (the one who drives the commanders) I don’t suppose. She remarked how brown and healthy the children looked.
Father has relented and let me have one of the flower beds back for growing flowers. It’s a little difficult to make nice arrangements for the church with onions, carrots and cabbages. We have lettuce and tomatoes too, though they’re now almost finished. The spinach has been the most successful. And I’ve actually started to like spinach. And you’ll never guess what: I’ve made a very good strudel with cabbage. It really works!
I’ve managed to get a good supply of flour and our neighbour is keeping chickens so lets me have an egg now and then so I can still make cakes and biscuits. I needed to do that with the cousins around. The fresh air was giving them an appetite.
It’s true, you know. There are lots of free ingredients if you look for them. I’m making a blackberry crumble cake just for me and Mutti and Vati tomorrow.
I’m really looking forward to September. I’m starting my training to be a Kindergarten helper then. That means I’ll be working with very young children all the time, though there will be some studying to do as well.
Isn’t the time going by quickly? And I still don’t really feel as if we are having a war.
I look forward to reading your letters again.

Your friend,
Helga
Posted by Gill James at 09:53 No comments:


This scene was removed because the editor thought there too many letters included. Subsequently one reader has noticed that there are letters missing. I did very carefully make sure all of the threads made sense. Nevertheless, I have still left this out in the new edition that comes out shortly.

Dear All,
I am so sorry I’ve held on to this for such a long time. It really is bad of me. But life is getting so hectic. I think it’s an excellent idea to include Fräulein Braun in our round letter from now on. Anika can send it to her, if everyone agrees, and then she can send it to me.
What about Renate then? A Jewess? Unbelievable. I wonder what it’s like, being in England. I just can’t imagine it. What a pity we learnt French and not English at Wilhelm Löhe! But perhaps she’ll be all right. I seem to remember she learnt Italian very quickly when we went to Italy. And do you remember her speaking German with an Italian accent, imitating those boys who had tried to talk to us? And that time she picked up the Bavarian accent? She’s so good at accents. I think she might do all right there – better than I would anyway.
Isn’t this weather glorious? I do hope it stays for the summer. I’m so looking forward to going swimming again with my cousins. I might be going back to the Bodensee for the summer. But sadly, that will mean the end of my connection with the nursery for a while.
Well, I’ll finish now. I really want to get this into the post. The sooner I do that, the sooner I can look forward to all of your news. I promise that next time I won’t hold on to the book for so long.

Lots of love,
Yours Helga 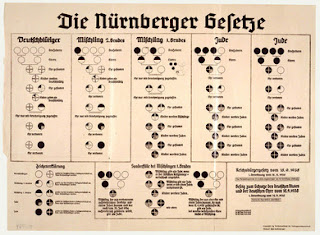 These were invented in 1935. They determined whether  you were Jewish or not. here are some examples:

If your parents and grandparents were all German - you were safe - you were German.

If your parents and grandparents were all Jewish, you were not safe.  You were definitely Jewish.

If you had two grandparents and one parent who was Jewish you were a Mischling of the first degree. This applied to Renate. She had two Jewish grandparents and a Jewish parent. Her mother and her mother's parents were Jewish It didn't matter that her grandparents had converted to Christianity. They are Blut - bllod laws.

Interestingly some orthodox Jews welcomed these as they gave a solid definition of who was Jewish.
Posted by Gill James at 13:05 No comments: