How we get persuaded into war 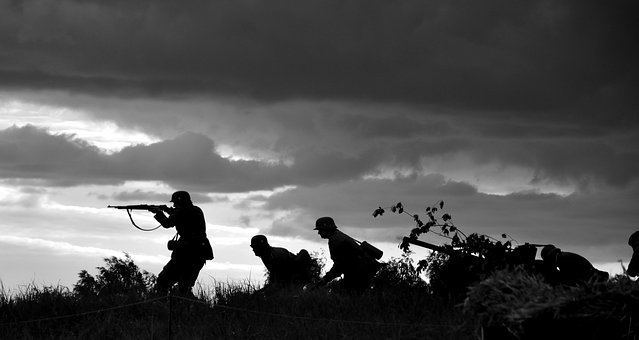 Does anyone actually really want war? Maybe a few psychopath megalomaniacs do? We often hear the argument that if people refused to fight there would be no war. However, it’s not that simple.

We wouldn’t have expected the Ukrainians just to sit back and do nothing when Russia invaded, would we?

I once had an A-level German student who in his prepared talk for his oral exam argued that women shouldn’t be expected to fight. I played devil’s advocate and pointed out how mothers in the animal kingdom protect their young. So, yes they would fight.

Surely we need defence? And in order to have defence we need trained forces. These same forces can be useful in peace times too: for example, in the recent pandemic, when there are climatic catastrophes and when essential services strike or are overwhelmed.

The argument for being allowed to keep guns is that one has the right to defend one’s home and one’s family.

Sometimes we have to get involved. When Hitler marched into the Sudetenland he was given an ultimatum by our prime minster. We had to follow through with our threat.

We’ve been at war a couple of times in my life time and both times I’ve felt very uncomfortable.

At the time of the Falklands we lived near a lot of naval families. They felt it all keenly. We knew some of the families of people who died.

The war in Iraq was so divisive.  The United Nations couldn’t agree about it. Many other nations disapproved of our involvement. Maybe it was a good thing that we got rid of Saddam Hussein. Can’t somebody do something similar to Putin? Though I’d like him to be taken alive and made to face up to what he’s done. Where were these weapons of mass destruction? And why did the best prime minister I’d ever known let me down so much? His government as well as taking us into the war abolished compulsory language learning for secondary school children. Language learning may even help to prevent some wars.

What motivates people to start wars? They feel that some injustice has been done even if it’s imagined? Germany did have a rough time after the Great War. Their aggression may be a reaction to this. Putin is looking for some idealised version of Russia. Thatcher was scared of losing some power.  Blair may well have been sincere in his belief in the existence of those terrible weapons and how Hussein might have used them.

And what of weapons of war anyway? They can be atrocious. Look at the gas in the Great War and the Doodlebugs and V2s that Germany invented in World War II. What we did to Hiroshima and Nagasaki was appalling. What’s up next? Even more sophisticated nuclear weapons? Biological weapons? Cyber-attacks?

What about the men and women who are drawn into the fight? Many volunteered for the Great War out of sense of honour and also because it offered employment. By the time of World War II people were seeing thing more clearly. Conscription was a necessary evil. Now we see war a little differently. Even the professional military would rather be rescuing families from floods and delivering food parcels than dropping bombs. Yet they have the training and it kicks in when they’re in confrontational situations.

It saddens me when one looks at the history of wars that it’s always decisions of politicians, dictators, and world leaders, often older white males, (many argue that Thatcher always behaved like a man) that send younger people to war.

“Make love not war,” was the cry of the woke-Boomer-hippies. This was probably mainly in response to Vietnam. Yet it is too great a love for something, clinging on to a past that we can no longer have, that sometimes provokes those very wars we believe to be the opposite of love.

Email ThisBlogThis!Share to TwitterShare to FacebookShare to Pinterest
Labels: war

The Outsider in the Schellberg Cycle

Is there in the end actually anywhere a true insider and don’t we always at some time experience ourselves as the other?

There are plenty of examples of “the other” in the Schellberg books.

The House on Schellberg Street

Renate is shocked to find that she is Jewish. She isn’t Jewish enough though to feel comfortable with other Jews and she certainly struggles to feel at home in England. In the end she has to simply accept herself.

The Göddes are not like many other Germans. Hani Gödde in particular cannot be as enthusiastic about the BDM as the other girls.

A school for children with disabilities and learning difficulties continues in the house on Schellberg Street.

Clara has to give up being Jewish. She never quite fits into the Gentile world and isn’t 100% attached to Steiner‘s teaching. She shelters what the Nazis would call defective children in her home.

Girl in a Smart Uniform

Gisela is at first an enthusiastic member of the Nazi regime. It can’t last however; her stepbrother has Down syndrome and she is a lesbian. She and her partner find sanctuary in the Netherlands but unfortunately there they are seen as being too German.

Face to Face with the Führer

Käthe is unusual; she studies science at university, unheard of for a woman in her day, she is the first woman to get her driving license in Munich and she learns to use a gun.

Renate’s former class mates are naïve. They have to face the horror of what the Nazi regime has brought. At the same time however, a gentle feminist rebellion takes place. Each of the girls featured does something a little unusual.

One girl goes to agricultural college and becomes a farmer.

Another becomes an actor and works in an underground theatre satirizing Hitler’s regime.

Twin sisters take over the management of their father’s firm after he died suddenly.

Their former class teacher refuses to teach the Nazi curriculum and has to give up being a teacher.

I Am of This Land

Blond-haired Jewess Helga survives Nazi Germany only to face more prejudice in her new home.  Even as she lived in hiding with other Jews she felt herself to be different.

She is different from her family anyway.  She is artistic and has Mediterranean looks. She mixes with artists and musicians.  And she joins the German resistance.

There is so much “otherness” here that the “other” becomes the normal. Is there something to be learnt about how we respond to the strange? Should we not welcome the novelty of it rather than fear it? Isn’t it our fear that leads to division?