Shortages – then and now 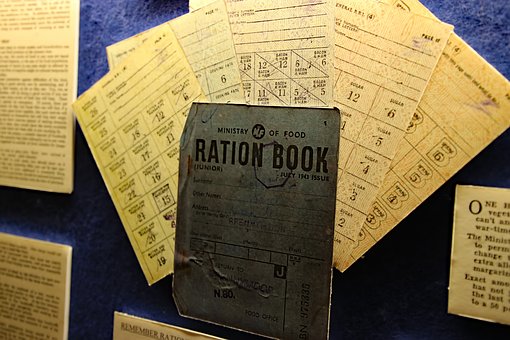 In the UK today we’re suffering from some shortages. In most cases there isn’t an actual lack of goods but a lack of people to pick the crops and deliver the supplies. Some problems are caused by our new trading rules. Brexit has caused a few more. The pandemic has had its effect. There is also a general labour shortage because of an aging population. During World War II there was a shortage of labour because many of the men were fighting in the war.  Females took on traditional male roles, including truck and ambulance driving. Land girls worked on the farms. However when the men returned they had to hand back these positions. We’re tentatively inviting back the EU immigrants we’ve just rejected – and we’re not being very successful.

Just before World War II there had been the great depression.  During that time there was enough of everything – if you could afford it.  In the US, as they joined World War II in 1941, food shortages started immediately.

Germans of a certain age – the parents of the war generation – were used to hoarding non-perishable food because of the 1920s’ hyperinflation, where they had to change their money into goods as quickly as possible. Rationing in Australia during World War II helped to curb inflation there.

We have had panic buying of toilet rolls, flour, pasta and most recently petrol. Petrol was the first commodity to be rationed during World War II. All goods depend on petrol.

Our supermarket shelves are looking emptier by the week. Fruit and vegetables during World War II were not rationed though there were shortages. Some were still imported, such as onions, tomatoes and more unusual fruits. People grew their own. Shall we have to do this again now?  Or roll up our sleeves and go and pick them? We take so much for granted now. My grandmother was a greengrocer and it was exciting when she had a huge box of bananas delivered. Now we eat bananas almost every day.

Most families these days do one big shop a week at the supermarket, or have goods delivered once a week. In the 1940s, when fewer people had fridges and domestic freezers were unheard of, people used to shop daily. There would be queues outside most shops. In the early days of our pandemic there were huge queues outside our supermarkets.

We are now threatened with soaring energy bills which will lead to fuel poverty for many people. We in the UK get much of our electricity from France, supplied by their nuclear reactors. However, the main cable transporting this energy has broken and will take months to repair. We haven’t had enough wind lately to generate much electricity via our wind farms. In the 1940s there was a shortage of coal; people were only allowed warm water twice a week. This was particularly harsh in the cold winter of 1939-1940. Even in the 1950s, I remember bathwater being limited to five inches. I longed for a deep bubble bath like you saw in the TV ads and the glossy magazines. Will we be limiting ourselves soon? Or will our power showers still work?

There was a shortage of clothing too during World War II. People were encouraged to “make do and mend”. We are now encouraged to do that but for slightly different reasons.  The fashion industry has a huge impact on the planet. Clothes manufacturers are now encouraged to consider and deal with the end–of- life of what they produce. The pandemic has made many of us limit our wardrobe and we are finding that we can manage with less. However, this impacts on the livelihoods of those who work in the fashion industry. During World War II there was generally a shortage of shoes.  Maybe we could go back to painting our legs if tights become a problem.

There was a shortage of nurses in the US from the mid-1930s. The situation worsened during World War II as many started serving the military. It did not reverse as much as one would have expected in the 1950s; many did not return to their pre-war roles.  We currently have a shortage of nurses.  This is caused partly by poor morale generally, extra pressure that the pandemic has caused and because we are no longer recruiting from the EU.

So, there are parallels. On the whole, we’re probably not having it quite as bad as they did – yet.

Image by Kevinsphotos from Pixabay