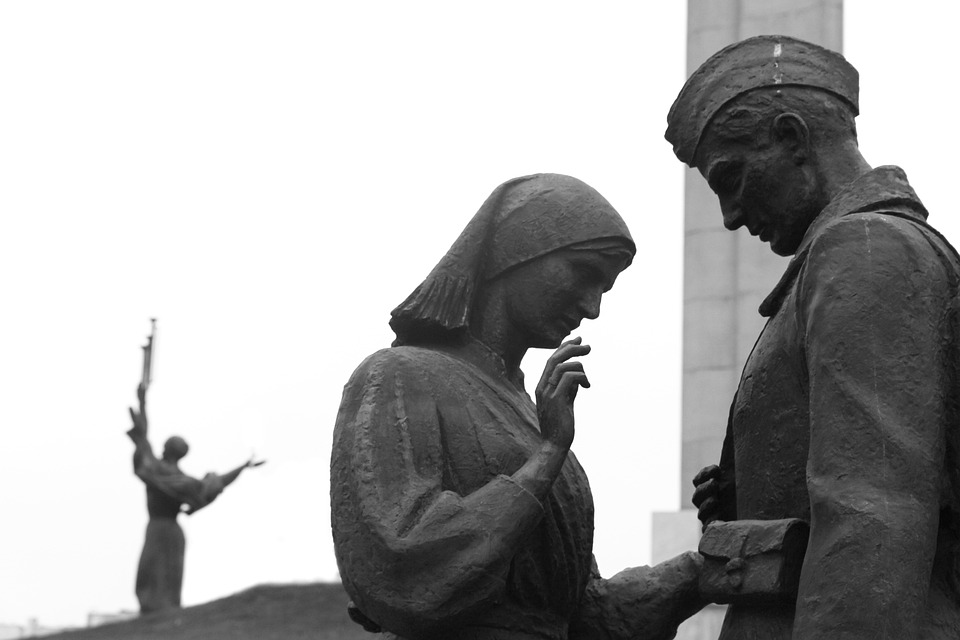 My maternal grandfather served in World War I and my father was called up on his 21st birthday for World War II.  My grandfather was gassed but survived.  My father injured his leg when a motorbike he was riding skidded and fell over. He was also mentally scarred as he was involved in clearing out Belsen. My mother’s first husband was killed during World War II. My mother-in-law was a German Jewess who fled from Nazi Germany. My father-in-law was involved with the Manhattan project. War was a shadow that hung over our childhoods.  We had war-damaged parents.

The suffragettes changed their cause at the outbreak of World War I (the Great War).  They started presenting men they thought should have been fighting with a white feather. The white feather has symbolised cowardice since the 18th century. This may come from cockfighting where it was believed that a cockerel with a white feather in its tail would be a poor fighter.

This did not start until January 1916 in the UK. We had relied on volunteers until then. Men aged eighteen to forty were liable to be called up.  There had been many volunteers so conscription was not needed earlier on.

Germany already had a partly formed army: Compulsory military service had been the norm since long before the war (and continued long after, ending only in 2011). The 1914 system was as follows: at the age of 20 a man could expect to serve 2 or 3 years of training and active service.

Realities of war kick in

The Great War had been romanticised.  Young men were eager to go and fight for king and country. Yet what they found was mud, chaos, disease and death. The War Poets put us straight.

This happened much sooner. The National Service (Armed Forces) Act, passed on 3 September 1939, the day the war broke out, imposed conscription on all males aged between 18 and 41 who had to register for service. Already men aged between 20 and 22 were conscripted by the Military Training Act in May 1939.   This required men to undertake six months' military training, and some 240,000 registered for service.

Again Germany relied a lot on its young men doing military service. There was also compulsory war work for women on both sides of the conflict.

How it all started

It all started with a duke being assassinated. That was the catalyst for the Great War. World War II continued the unfinished business from World War I.

It’s all over when it’s over - or not

Both wars ended and the peace began.  Or did it? World War I was followed by the “Spanish” flu pandemic that actually killed more people than the war itself had.

After the end of World War II came tension between Israel and Palestine.  So, many Jews who had fled there were now facing more conflicts.

Russia may have been our ally during World War II but very shortly after that ended we were facing the Cold War.

Email ThisBlogThis!Share to TwitterShare to FacebookShare to Pinterest
Labels: conscription