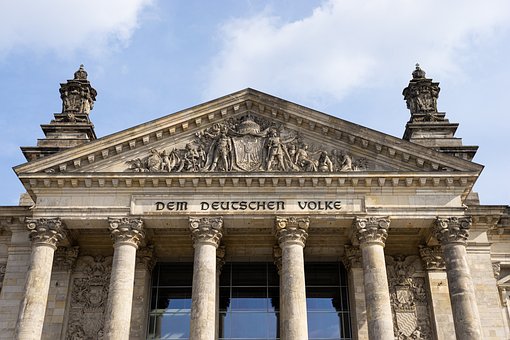 This was a terrifying piece of legislation and there are some uncomfortable parallels with what is happening today.

In the election the previous year, Hitler had won 37.37 of the vote. There had been an 89% turn out at the polls. However, although this gave him the democratic right to take up leadership the two “runners up” gave him represented a threat. The Social Democratic Party gained 21.58% and the Communist Party 14.32. This would make it difficult to push forward any of his party’s ideas.

What the enabling act did

It enabled laws to be passed without the scrutiny and consent of the Reichstag. This was in order to “Relieve the stress of the people (das Volk) and the Reich. Germany was in a bad way. It still owed money as a result of the Great War (1914-1918), it had suffered from the hyperinflation during the 1920s and the Depression that affected a lot of the world hit the Germans particularly hard. This was got be a way of getting legislation through quickly

How did it come to be accepted?

It should not have been all that easy for Hitler to get this passed. The Communists and the SDP still had a lot of representation in parliament. In the end though, 444 voted for it and 94 against. 109 were absent. Significantly none of the Communists voted as they had been banned by now and the 94 against were all form the SDP.

There was a culture of bribery and threats.

Consequences of the Act

Hitler was now in a position to bring in many new laws which helped to further control the people.  This included the banning of  trade unions and the citizenship and race laws that were brought in in 1935.

The current Prime Minister of the UK prorogued Parliament in 2019 in order to allow Brexit to take place more smoothly.

Noisy demonstrations have now been made illegal.  So, peaceful protests are still allowed but who defines which are peaceful and which are not?

There has been a suggestion that journalists who criticise the government should be jailed.

There seems to be a culture of fear within Parliament. Why does my local Tory MP toe the party line to the letter when he only had a very narrow majority over the Labour candidate? He certainly is not representing me in any of his voting. Shouldn’t he also be representing the other half of the ward?  Whys is he afraid to do that?

Ordinary people have been taken in by the charms of a charismatic leader.

Differences for which we should be thankful

At least the proroguing of parliament was reversed.

We don’t yet have to have pictures of Boris Johnson in all classrooms and children don’t have to pay homage to him on daily basis.

No one has been beheaded for opposing the government – yet.

We don’t have to practise a greeting every day that includes our leader’s name.

Our charismatic leader is a scatty, hair-fluffing, lying buffoon who will sooner or later be found out.