Again reading some fiction has made me realise that choices are not always easy. Neither was everything conveniently black and white

The Paris Library, mentioned in my previous post, showed some of the difficulties of living in occupied France.  A mixed bunch of people visited, borrowed from and studied in the American Library.

Margaret, an English woman and a diplomat’s wife, was arrested because she had not been reporting to the police every day as an enemy alien must. She had a novel in her bag and read to the other women.  This so enchanted one of the guards that he let her and some of the other women go.  He eventually became her lover and supplied her with many goods she wouldn’t normally have been able to obtain.  This included items that her friend was able to send to her brother, a prisoner of war.

Professor Cohen studied in the library. Later, as a Jewess, she was no longer allowed to leave her apartment. Her books and papers were confiscated but the staff at the library continued to deliver books to her. This did happen: staff form the American Library in Paris did deliver books to Jewish people who were confined to their homes.

Protagonist Odile stole the “crow” letter – letters denouncing people of interest to the Nazis - but in doing so she put her father and fiancé in danger.  They were both policemen and this could harm their careers.

Odile’s fiancé Paul did not get called up as his job as policeman was considered important.  However, once Paris was occupied by the Nazis he has to do many things of which he is not so proud. He is instrumental in getting Professor Cohen transferred to a concentration camp. He and a colleague end up beating Margret up. On a lighter note he has to wear white gloves, which he detests, in order to direct traffic.

The library was offered some protection by Dr Hermann Fuchs who regularly inspected. He already knew Miss Reeder, the director, and they shared a love of books. Though they must not distribute or display any of the banned books, he allowed the library a great amount of freedom. These two people really existed.

Odile obtains a post as librarian at the American Library in Paris. She continues working there for most of World War II. She makes many friends, some of whom later are in danger: Professor Cohen, who is sent to an internment camp, Margaret, an English woman who is the wife of a diplomat, Bitsi who works in the children’s section and many others.

She has a twin brother, Remy, who dies whilst he is a prisoner of war.

She finds out that her father and the man she married, both of whom are policeman, have been responding to “crow” letters – letters that giveaway illegal activities. Odile hides some of these letters. She leaves her husband of one day when she finds out this that he has been involved in beating up Margaret who had had an affair with a German soldier.

We read of Odile in World War II but also of her life in the 1980s as a widow in America. She married bigamously an American soldier she met at the American hospital. She befriends   a young neighbour, Lily, and tries to help her avoid the same sort of mistakes she had made.

Some of the characters are based on real people. 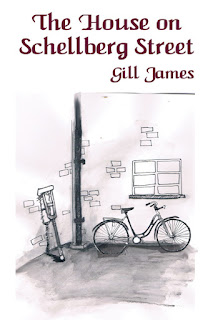 Ways of buying the book

Just a reminder that all writers need reviews and it would be great to get a few more reviews for this one. In fact. we have an offer on all three titles. See them here in our online books shop: http://www.thebridgetowncafebooksshop.co.uk/2021/07/all-three-schellberg-cycle-books-2100.html

Reviews can be short and to the point though it's good if you can say why you've given it the number of stars you've awarded.

Email ThisBlogThis!Share to TwitterShare to FacebookShare to Pinterest
Labels: reviews

This is a complex novel.  It is 548 ages long and has numerous sub-plots. Near the beginning of the book is a list of characters, categorised by the places where their action happened: Altdorf, Berlin, JG23, and the Eastern Front. Most of the characters are fictional .A few really existed: Generalfeldmarschall von Kluge (Army Group Commander), General Von Greiffenberg (Army Group Chief of Staff), Carl-Heinz Graf Hardenberg (ADC to C-in C) and Philipp Freiherr von Boeslager (ADC to the C-in C). A little confusingly the protagonist, who is fictional, is Philip Freiherr von Feldburg (General Staff Officer).

Many of these characters resist the Nazi regime, one way or another. A few are fanatical Nazis.  As I seek to do with my books in the Schellberg Cycle, Helena Schrader uses fiction as a way of uncovering fact and truth.

·         What happened to those people who helped Jews and other  undesirables

Schrader is well qualified to write this text.  She has studied the Nazi era for over thirty years and her PhD thesis was a biography of the German resistance leader who developed the Plan Valkyrie, which included the plan to assassinate Hitler, and details of how the regime would be handled after his death. A coup attempt was made but failed on 20 July 1944.

As I read more of Helena P. Schrader’s 548 page novel An Obsolete Honor I realise how complex the situation was for many who lived in Nazi Germany. One sees at once that the resistance offered by the White Rose movement was naïve. The students rebelled openly and distributed pamphlets that said that the Nazi regime was wrong. They were rounded up pretty quickly and beheaded.

Most of the characters in this novel take a more pragmatic approach. They attempt to work from within the system and appear compliant. The main character is at once a skilled military man who obeys orders and one is disgusted by the treatment some of his colleague mete out to Jews, gypsies and Russian civilians.

His father-in-law is also against the government but is intolerant of anyone else who is and makes it too obvious. A lack of subtlety will undermine any attempt at getting rid of Hitler.

The protagonist’s sister marries a dedicated Nazi who controls factories in the east and is involved with the Warsaw ghetto. His father had been unemployed for eighteen years after his business as a locksmith failed. The Nazi regime brought him employment and hope for the future.

A young woman who forges a birth certificate for a Jewish child in a desperate situation goes on to forge other documents.  Her boyfriend is an SS officer.

Many people see parallels in the UK today and I have to admit to seeing these very early on when I first started this project in 2011. The proroguing of parliament reminded us of the 1933 Enabling Act. The treatment of some Windrush immigrants is highly disturbing. This is particularly so for me; many of my friends in my teenage years were first generation Windrush – and incidentally I’m not comfortable with labelling them as such. The new law on protests feels oppressive. At least, though, we’re not saluting each other in the name of Boris Johnson or Donald Trump. There aren’t pictures of our questionable leaders in classrooms.

Social media is both our enemy and our friend in this. It polarises us more but it does allow space for debate and is more effective than the Stammtisch was in 1940s’ Germany, when you couldn’t be sure who you were talking to. At least today we can find our tribe. Perhaps also because we have studied the Nazi era and recognise some of the pitfalls attempted fascism doesn’t have quite as much hold.

We need to remain vigilant, however. The present Tory government is stabbing the working class in the back at the same time as seducing the workers by making them laugh and promising more jobs than there are people in a by-election town. The opposition is cannily praising the British spirit in order to gain back working-class votes just as Hitler and co included the word “Socialist” in the name of the party to maintain the support of the workers.

We can understand why Germany felt aggrieved. After the Treaty of Versailles it was not allowed anything but a skeleton army. It had huge debts which led to hyperinflation and a worse experience than other nations of the 1930s depression. The Jew became a scape goat.  Something else was going on as well, though. Something much more sinister. There was some concern about purifying the German race. It could not be polluted by non-Aryan blood or by the weaker elements in society.

Survival of the fittest? I shudder a little that a week today we are being asked to return to normal though a pandemic is still raging in the world. Is this an attempt to get rid of the frail and vulnerable?

Well, again, here is an example of how reading, and reading fiction at that, helps us to form our view of the word. I’m about one hundred pages form the end of the novel.  When I reach the end, will I have hope for the future or will I have to conclude that human nature is thus and we just have to live with it?