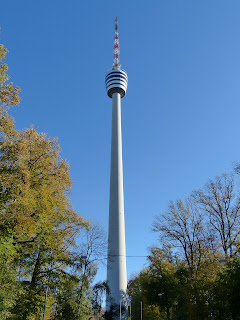 March to July 1973 I spent part of my year abroad in Stuttgart. The UK had just joined Europe commercially. I was in the third year of my four year BA Dual Hons French and German at the University of Sheffield. My future mother-in-law had suggested Stuttgart as a good place to go for the German part of my time abroad.

“It’s a really special place,” she said.  “The people there are extraordinary.”

This lady is the Renate from our stories.

She then went on to tell us about the school that the Nazis wanted to destroy.  First the home guard was ordered to do it and they refused.  So the task was given to the Hitler Youth.  They also refused. The BDM had to do it.  There was no way that they could refuse. But they got the children out first.  As soon as the war ended the school opened again. Renate was never specific about which school she meant but my researches have made me conclude that it was the one that operated in the cellar of the house on Schellberg Street.

I loved my time in Stuttgart. I was invited back last year to talk about the Schellberg Cylce.  Unfortunately the pandemic hit so this was no longer possible.

My father-in-law died recently and a couple of weeks ago we cleared out his house. My husband is currently digitising all of his slides. These include ones from a visit he and his parents made to Stuttgart in 1957. I immediately recognised the places and the people in them.

In 1973 I lived in Degerloch, very close to the television tour. My mother-in-law put me in touch with the Behnisch family. Hannah Behnisch was her very best friend.  This is NOT  Hani in the cycle.  She is completely made up. However, just like her mother, Frau Gödde, Hannah’s mother visited Clara Lehrs in the ghetto.

My husband found pictures of him,  his parents and the Behnisch family in Degerloch. I got to know that family quite well during my stay. They lived in the neighbouring village of Sillenbuch. The two girls are roughly the same age as me and the younger brother was often dispatched on his motor cycle to come and inform me that I was invited over to some event or other at the weekend. These included joining the family for Sunday lunch, going on excursions to the cinema, improvised concerts amongst neighbours on rainy Sunday afternoons and several visits to the Waldorf School to help with English lessons or to attend special events.

When I told the two elderly sisters from whom I rented a room of my connection with the town, their eyes grew round. “Oh, yes, Haus Lehrs is on the Schellbergstrasse.” Back then I didn’t realise just how significant it was.

A great joy this week has been that my husband has found in this collection a photo of Clara’s house. It is exactly as I always imagined it.  Have I perhaps seen a photo of it before?  I’m not going to post it on here – the house is blocked out on Google street view and I want to respect the current owner’s desire for privacy.

But I am going to commission an artist’s impression of it.

Image by Harald Matern from Pixabay