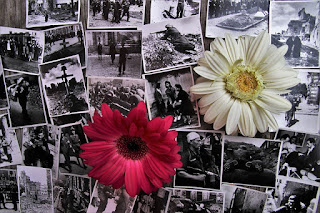 I attended an academic research seminar this week in which a colleague talked to us about his novel set in Russia. He asked us about our perceptions of Russia and commented that there were many romantic views of it.  Another colleague remarked that it was odd how the Cold War had been romanticised but not the Nazi period.

Was that period too awful that it shouldn’t / couldn’t be romanticised?

Well, I certainly have some romance in the current book that I’m writing but it’s that ordinary romance that you might find in any 1940s novel, where young men return from fighting and marry their girlfriends.  They just happen to be German young men.  This is set against a background of the girls finding out some difficult to digest truths about some of the things that had been going on in the background.  And also finding out that their heightened sense of duty and the close bond amongst them that was stronger than family ties may not have been so healthy.

Certainly my young girls in Girl in a Smart Uniform have romantic notions of what it would be like to become a perfect German woman. The main two women are lesbians but female readers may find the handsome Nazi officer they work with very attractive, though he then does something so terrible that they’ll end up not liking him at all.

Isn’t there something quite attractive about those smart leather great coats that the SS wore? And weren’t the women who worked with them rather glamorous, something to be aimed for? Of course it was all so nasty many people conclude it’s best forgotten.

I grew up in fear of the swastika. This was something evil though I didn’t really know why. The name Utrecht (not really sure why for that one but even so ….) and Treblinka had an exotic sound about them. Yes, they were horrific – but certainly also promising something unknown, something exotic. I experienced a kind of sanitised dread.

Terry Nation brought us something similar with the Daleks. Compare their intonation with some of the things you hear form the Nuremberg rallies and just look at what they do with their “arms” when they shout “Exterminate!” Nation used a pattern from the Nazis to bring us ultimate evil.

I didn’t learn about the Holocaust until I was eighteen. It may seem amazing but for the generation born at the end of and soon after the war what happened was really supressed. More so in Germany than in the UK. Now, though, the grandchildren of victims, perpetuators and bystanders are middle-aged and mature enough to examine this and to pose the question ”What went wrong?”

I’m trying to answer that question in my cycle of novels.  I’m getting it the heads of young women who lived through that time and I’m trying to trace their emotional growth. I’m finding certainly that they were offered hope – often in the form of smart uniforms and a sense of purpose.  How terrible then when they realise that they’d got it wrong. That is the very premise of my current work in progress.

And I have one feisty young woman who becomes an actor and putting herself in great danger, works in the subversive, underground theatre that satirizes the Führer and his cronies. How romantic!