That sense of duty 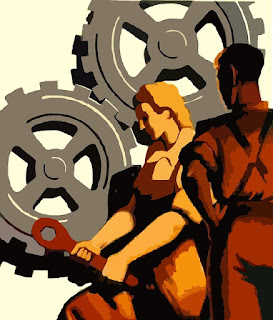 I noticed when I was studying the letters from the Wilhelm Lőhe School that two words occurred quite often: camaraderie and duty.  Now, I’ve made one of the girls also notice the word “duty”.

All of these girls will have attended the meetings and training sessions of the BDM, the girls’ equivalent of the Hitler Youth. They would have thereby been indoctrinated.  This organisation at first glance seems much like our scouting and guiding movement. Young people are taught many useful life-skills, wear a smart uniform and get involved in a lot of outdoor activities.

However it becomes a little more sinister, especially for the girls. They are to grow up to become useful women. Women were expected to be content with the bringing up children, working in the kitchen and going to church.  The latter may seem odd as the girls’ school was closed because it was a church school and did not teach Nazi values. Perhaps church was just a way of keeping the women occupied.

Big families were encouraged, so that more Aryans may be born.

The Lebensborn initiative was sinister. Women were encouraged to have good Aryan babies.  Single mothers were more than tolerated- as long as the father was a respected Nazi officer. Fantastic maternity homes and homes for young mothers were built. These became breeding centres.

The BDM magazine again looks just like a scouting magazine – until you start looking at the book reviews. As the years went by, they changed from recommending outdoor activities to providing more and more articles about home-making.

The girls I am studying don’t seem that different from the young British women who lived through World War II. Our women worked in munitions factories, became land girls and took on many of the jobs that the men who had gone to war had left behind, including ones in middle management. The German girls had to do their RAD (compulsory work experience) and then war work. They had lived through hyperinflation and the depression which was worse in Germany than here because of the constraints put on the nation after the Great War. They were very young at the time of the hyperinflation but it would still have affected them and they lived with parents damaged by it.
Of course they wanted their country to be great. Why wouldn’t anyone want their own country to shine?

In my latest novel, Erika, one of twins who have to run their father’s factory after he dies suddenly, and Frau Schmitz the secretary there, come up with their own version of what doing duty means. It is about being aware of the needs of others. And if that leads to Germany becoming great again, so be it.

Image by Oberholster Venita from Pixabay
Posted by Gill James at 01:11