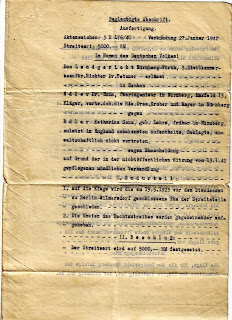 Käthe had to obtain a visa to exit Germany and another one to enter England.
She had to leave most of her property behind. She could not bring much money with her.
In order to obtain a visa for England she would have to have a job.

Imagine Käthe applying for a job as a domestic helper. (This was actually the job that she obtained.) What would she write in her letter? Remember she had experience as a wife, mother and scientist.  She could also drive.

Käthe settled in north London. There was quite a vibrant group of German Jews living there.  This would be useful to her as she didn’t speak English all that well at first. Just like her daughter Renate she was unsure of her identity.  Was she German Jewish or English?

However, Käthe had no firm religious belief and neither was she submerged in the Jewish culture. How might she have made friends with English people?   Create a short scene to show this.

London was not an easy place to live in during World War II. Search for details of London bombings.


Write a letter from Käthe to Renate about what it was like during the blitz and how she had shared this experience with English people.