Although Renate was tucked away in Minehead for much of the duration of World War II, she did spend some time with her mother in London. She was also constantly worried about her mother who was in danger of being bombed by the Allies.
What do these pictures tell you about what it was like? 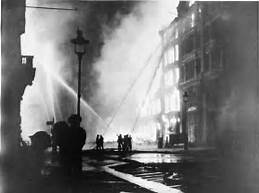 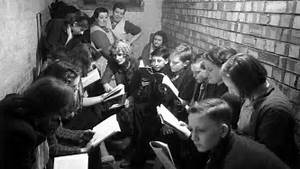 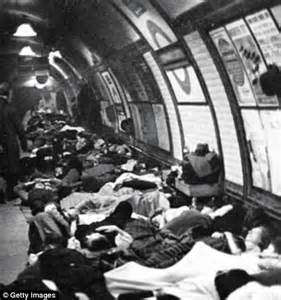 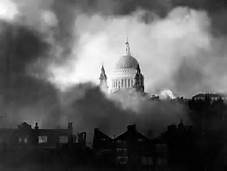 They came just after dark, and somehow you could sense from the quick, bitter firing of the guns that there was to be no monkey business this night.
Shortly after the sirens wailed you could hear the Germans grinding overhead. In my room, with its black curtains drawn across the windows, you could feel the shake from the guns. You could hear the boom, crump, crump, crump, of heavy bombs at their work of tearing buildings apart. They were not too far away.
Half an hour after the firing started I gathered a couple of friends and went to a high, darkened balcony that gave us a view of a third of the entire circle of London. As we stepped out onto the balcony a vast inner excitement came over all of us-an excitement that had neither fear nor horror in it, because it was too full of awe.

And what Renate imagined:
It was screaming at her urgently now. She had to get out.
Where were Mutti and Eva?
Already down in the shelter?
There wasn’t time.
She would have to shelter under the table.
They were really close.
They’re dropping the bombs now, she thought.
Posted by Gill James at 00:43