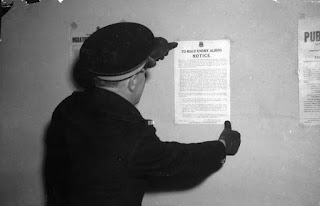 There were three types:
‘A’ - to be interned.
‘B’ - to have restrictions placed upon their freedom
(a ban on travelling more than five miles, owning cameras
or large-scale maps)
‘C’ - dubbed friendly and to remain at liberty.

Both Renate and Käthe Edler were defined as Enemy Aliens, Class B. This meant that they did not have to be interned. They were allowed a certain amount of freedom but they did have some restrictions. They couldn’t travel more than ten miles away from home without special permission, be out after a curfew of 10 p.m. or be near the coast or a munitions factory without special permission. However, this permission was usually granted. Renate really did have a similar incident with a bike to the one in the story.

Renate did not become an “enemy alien” until her sixteenth birthday.

A Class A alien was considered a danger to the state and was interned. This included some of the people who had originally come on the Kindertransport, which is slightly puzzling as many refugees were classified as C – no threat at all. However, several male internees later joined the British forces.

Perhaps it was because Renate and Käthe considered themselves German rather than Jewish that they were not given complete freedom.

Why do you think the rules about what Enemy Aliens Class B could do were made?
How might these rules have affected someone like Renate?
How might it have affected her mother?  (She lived in London for much of World War II.)

An extract from the novel

It had got complicated. Now that she was sixteen she had become an enemy alien proper. She had obtained the permission to be near the sea – with the school being so close to the beach they had to allow that. She’d also got special permission to be more than ten miles away from home when she needed to report to the police station - the nearest one was ten and a half miles from them. But she’d forgotten to ask for special permission to stay out after ten tonight. It had been too late to cycle back to the police station and Mrs Williams was out with the truck.
“It doesn’t matter,” David had said. “We can go to the seven o’clock showing and we’ll be out by just after nine. Then as long as we pedal reasonably fast, we’ll be back just before ten. And before you ask: yes, it’s less than ten miles away. Nine and three quarters actually. I looked it up on the map. It’s the other end of town from the police station.”