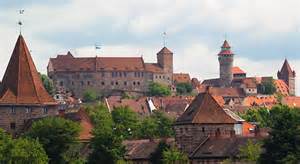 Most of the girls in the first book of the Schellberg Cycle were born as the hyperinflation in Germany ended. Some of the older girls in the story would have experienced this. Just imagine what it must been like having to turn your father's wages into goods the moment he came home from work. Families would buy some fresh food, certainly, but there would also have been lots of pickles, canned and bottled foods along with salted meat and fish.

Renate spent much of her early childhood in Nuremberg. Certainly she had more vivid memories of that than of Jena where she was born. Nuremberg was then and still is a bit of a fairy tale place. It has a magnificent castle and is the home of the world's largest international toy fair.

However, when Renate and her friends were younger it was also the home of the infamous Nuremberg Rallies. Thousands of people would march into the grounds that then echoed with Hitler's charismatic rhetoric and the "Sieg Hiel"s which don’t sound all that different from the Daleks' "Exterminate!"

He wanted to take charge of education. He sought to mould young people into perfect Germans.

"My program for educating youth is hard … weakness must be hammered away. In my castles of the Teutonic Order, a new youth will grow up, before which the world will tremble. I want a brutal, domineering, fearless and cruel youth. Youth must be all that. It must bear pain. There must be nothing weak and gentle about it. The free, splendid beast of prey must once again flash from its eyes…That is how I will eradicate thousands of years of human domestication…That is how I will create the New Order.”

In England, we know them as Steiner schools. They still exist and there are now many worldwide.

Steiner specified four conditions for the Stuttgart school:
This is so very different from what was going on in other schools in Germany. It eventually had to be closed down but opened again after World War II.

Renate only experienced the Stuttgart school through her grandmother. However, she went to a Steiner school in England.

Germany does not have many private schools but it does tolerate the Waldorf schools. Many of the teachers who now work in these schools are very skilled artists.

The Bund Deutscher Mädel. An organisation for girls.
Renate actually left Germany before she had to join the BDM. It became compulsory for girls aged 14+. The uniform was very smart and must have been a joy for the girls who lived through the hyperinflation of the 1920s and the depression of the 1930s which hit Germany even more than other European countries.

It was a little like our scouting movement to start with but the emphasis soon shifted to making the girl into homemakers. There was some subtle indoctrination. The girls in the book have been taught to value camaraderie and duty.